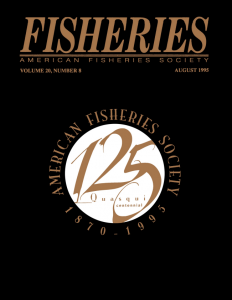 THE PURPOSE of this paper is to update the published history of the American Fisheries Society (AFS). The early years of the AFS have been extensively covered by Thompson, Benson, and Hutton in A Century of Fisheries in North America, published by the Society in its centennial year, 1970. Here, we cover the 25-year period from 1969 to 1994.

The rapid growth in size and significance of the Society that occurred in the two decades following the end of World War II has continued today. The Society has achieved its largest membership, its largest array of subsidiary organizational units, its most ambitious publication program, and its most active efforts to influence international and domestic fishery policies and programs during this period.

Stimuli to Growth
Three major developments after World War II gave impetus to the growth of the Society. All reflected the growth in public interest in fisheries and a concomitant growth in public agencies responsible for fisheries affairs. But within the Society the (a) inception of Divisions, Chapters, and Sections; (b) the adoption of the mail ballot; and (c) the publication of Transactions of the American Fisheries Society as a quarterly journal (now a bimonthly) were vital to the sustained enhancement of the Society.