AFS Roots: The Father of All the Fishes 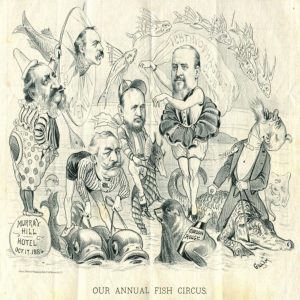 Robert B. Roosevelt was a member and frequent chair of the jovial Ichthyophagous Club’s annual New York dinner initiated in 1880, to the bemusement of the press and public. A menu illustration lampooned the Club’s founding members.

Most people primarily associate the family name Roosevelt with 20th century U.S. presidents: Theodore “Teddy” Roosevelt Jr. (two terms, 1901–1909) and his distant cousin Franklin D. Roosevelt (who is also known as FDR and served four terms, 1933–1945). But decades before Teddy charged to fame with his Rough Riders on Cuba’s San Juan Hill, or FDR led the United States through the Great Depression and World War II, the Roosevelt name was well known in political and conservation circles due to the accomplishments and passion of Teddy’s paternal uncle, Robert Barnwell Roosevelt (1829–1906). Robert was one of five brothers born into the socially and politically connected Dutch family in the affluent Manhattan borough of New York City. He was also grand‐uncle to future First Lady Anna Eleanor Roosevelt and distant cousin (sixth, once removed) to her presidential spouse, Franklin Delano Roosevelt. Robert’s father, Cornelius Van Schaack Roosevelt, was a hardware merchant who became one of the five richest men in New York through shrewd investments following the financial panic and recession of 1837. Neighbors referred to “That lovely Mrs. Roosevelt and her five horrid boys,” with Robert definitely being the maverick (Brands 1997). Perhaps he came by his contrariness honestly, as a descendant (and namesake?) of 14th‐century Scottish freedom fighter Robert the Bruce (Whittelsey 1902).

Robert’s family wealth allowed him the freedom throughout his life to pursue whatever interests he found intriguing. In the words of his stepdaughter Maude, Robert “Had three affiliations, political, social, and piscatorial, and the third was certainly nearest to his heart” (Pickard 1941). More than anyone else, “Uncle Rob” is credited with helping to shape nephew Teddy’s attitudes regarding conservation of natural resources (particularly fish, game, and their habitats) for future generations….Read more in the February 2020 issue of Fisheries Magazine.