Development of Electrofishing for Fisheries Management 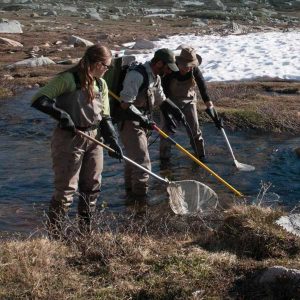 By James B. Reynolds and Jan C. Dean

Electrofishing may be broadly defined as the use of electricity to capture or control fish. The concept began on October 26, 1863, when Isham Baggs of Islington, Middlesex County, England, applied for a patent entitled Improvements in the Means of and Apparatus for Paralysing, Capturing or Killing Fish, Birds and Other Animals (Baggs 1863; Figure 1). Mr. Baggs was a visionary, proposing to use a battery to, among other intents, capture fish with electrified hooks, harpoons, and “metal‐sheathed” boats. He even proposed using lenses of the gemstone tourmaline to polarize light for improved vision into water. His patent came among a flood of proposals for various applications of electricity as the world embraced this new technology. Despite the rapid pace of electrical discoveries during the first 6 decades of the 19th century, the Baggs patent was unfulfilled because the batteries then available could not produce sufficient energy to meet the proposed tasks….Read more in the May 2020 issue of Fisheries.