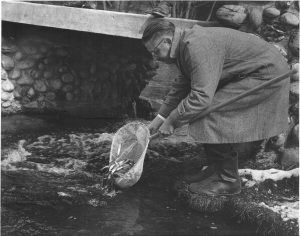 Like fisheries science itself, the American Fisheries Society (AFS) began with fish culture when the pioneers of North American fish propagation amazed the public with their ability to coax food and fishing opportunities from pails of eggs and wriggling fry. Once considered a novelty or a hobby, fish culture transformed over the decades and has become an essential tool for fisheries management and conservation, as well as the single most important source of seafood in the world. In this paper, we delve into the history of North American fish culture, describe and provide examples of how AFS has influenced our understanding and use of hatcheries and hatchery‐origin fish, and imagine what transformations may yet await fish culturists….Read more in the September 2020 issue of Fisheries.