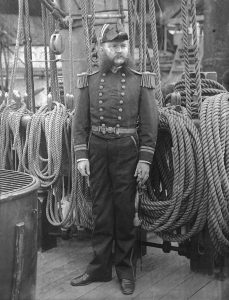 On our wall at home hangs a cracked, faded, large old painting. It depicts a mariner in a U.S. Navy uniform from the 19th century, standing on a ship’s deck in front of a mast. He wears a blue uniform adorned with two rows of gold buttons and epaulets. His left palm rests on a navy sword attached to his uniform, his face swathed in long muttonchop sideburns, and his head is topped by a peaked naval officer’s hat. His gaze is fixed into the distance out to sea. This painting has hung in a Bonar or Curtis household for well over 100 years. As a boy, I asked my dad who it was, and he told me “It is your great, great Uncle Clinton K. Curtis.” For years, all I knew about Uncle Clinton was that he was a mariner after the Civil War and during the Spanish American War. I heard that he had commanded some ships on the West Coast during the latter conflict. I also knew of him because of a few mementos of him we had around the house, including antique keepsakes from many ports that Clinton had visited around the world and a plaque on the wall made from the molten plates of Spanish warships. The historical nature of the 150th Anniversary of the American Fisheries Society piqued my interest into all things aquatic, including Curtis’ history. Until I started looking this year in earnest, I did not know of his connection to the early days of fisheries science….Read more in the March 2020 issue of Fisheries.